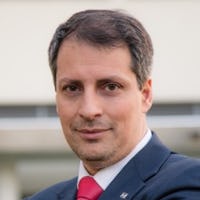 This nomination comes as the recognition of his dedicated work to the development of Quality Education Worldwide, in general, and the assembling the ENTER Network for many years, in particular.

Prof. Quadrado is a tenured full-professor at the Porto Polytechnic Institute (P.Porto), one of the leading and most prestigious engineering institutes in Portugal, where he is also currently the Pro-President for Internationalisation.

Innovative, good communicator and experienced in the field of Engineering he leads the Portuguese Observatory on European and Latin-American University management strategy best practices (TELESCOPI Portugal). Being a former member of the National Bologna Expert Group, he is the past-President of the Portuguese association of engineering deans (APDI2E).

As a current Vice President of the European Network for Accreditation of Engineering Education (ENAEE), he has been actively supporting the development of new accreditation agencies in Central Asia, Africa, Middle East, and Latin America.

He is the Chair Elect of the International Division of the American Society for engineer Education (ASEE) and simultaneously a Kazakhstan Society of Engineering Education (KazSEE) accreditation board member.

As an academician and researcher, he has been involved in more than 200 international publications, patents and has been the recipient of international technical awards and scholarships.

He has also occupied editorial positions in scientific journals. His academic work is mostly related to the fields of engineering education, sustainability, electric vehicles, and intelligent control.

He is the Peter I 2017 medallist from the Russian Engineering Education Association and was awarded the prestigious LACCEI Academic Merit Award, in 2014.

From the 1st of January 2022, Prof DR. José Carlos Quadrado will lead the ENTER Network to the intended planetary impact of  developing the international professional educator as a equally recognised profession.